News Updates for the Week of November 25 - Energy Watch News

News Updates for the Week of November 25

1.      LED Lighting Market Value in 2014 to Reach US$17.8 Billion, Says LEDinside – The total shipments of LED lighting products will reach 1.32 billion units, representing 68% on-year growth. LEDinside pointed out that the global LED lighting product replacement tide is caused by falling LED product prices. With replacement lamps being the most obvious, bulbs and tubes are the most popular ones in the market, which account for 38% and 24% of LED lighting product demand in 2013, respectively. In addition, the demand for LED luminaires in the future will gradually rise. According to the data, the growth rate of LED lighting market demand volume in North America is expected to reach 72% in 2014; in Latin America 64%; in Europe 69%; in China 86%.http://www.digitimes.com/news/a20131120PR204.html
2.      Top-10 Vendors to Occupy 69% of 2013 Global LED Lighting Sales – The 10 largest vendors will together account for 69% of global LED lighting product sales in 2013, according to Taiwan’s Photonics Industry & Technology Development Association (PIDA). The 10 largest vendors and respective global shares are Philips 20%, Osram 15%, Panasonic 8%, Toshiba 7%, Cree 4%, Endo 4%, Zumtobel 3%, Koizumi 3%, Iris Ohyama 3% and Sharp 2%, PIDA indicated. According to LEDinside, global LED lighting production value in 2014 will reach US$17.8 billion and corresponding shipments will increase 68% on year to 1.32 billion units. On-year growth in LED lighting sales volume in 2014 will be 72% in the North America market, 64% in Latin America, 69% in Europe and 86% in China. http://www.digitimes.com/news/a20131118PD200.html
3.      OLED Lighting Opportunities 2013-2023: Forecasts, Technologies, Players – OLED and LED lighting are both solid-state technologies and offer overlapping value propositions per market segment. They will therefore compete directly in many instances. This report is divided into two parts: (a) technology and (b) market assessment. The first offers a comprehensive yet detailed overview of both LED and OLED lighting, going through fabrication processes, material compositions, technology roadmaps, and key players. The device attributes of each technology are also critically assessed, examining parameters such as color warmth and controllability, flexibility, efficiency, surface emission, lifetime, wafer size, and luminaire design.  The second section offers a blunt market assessment.http://www.researchandmarkets.com/research/clk772/oled_lighting
4.      Zhaga Publishes New Downlight and Rectangular LED Module Specifications – The Zhaga Consortium has published its Book 7 and 8 specifications for LED light engines (LLEs), essentially placing the standards into the public domain for usage by any company. The new specifications, for modules focused on linear/square fixtures and downlights respectively, join Books 1, 2, and 3 that Zhaga previously made available for public use. Modular solid-state lighting (SSL) technology in general, and Zhaga-based modules in particular, are meant to accelerate product development and in the case of Zhaga allow lighting manufacturers to choose from compatible LLEs offered by multiple vendors. There are now Zhaga specifications, that the consortium calls books, to serve in a variety of indoor and outdoor fixtures types.http://ledsmagazine.com/news/10/11/10 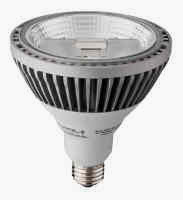 5.      DOE Publishes A Caliper Report and Subjective Study on LED PAR38 Lamps – The US DOE has published two reports on LED-based PAR38 retrofit lamps including an updated quantitative Caliper report on the lamps and a subjective report on light quality in which lighting designers rated various products. The Caliper report is an addendum to Report 20 in the DOE Caliper series that was initially issued in 2012, and the addendum covers six additional lamps and three additional benchmarks focused on the performance characteristics of the LEDs. The subjective report has been called Caliper 20.1 and covers the evaluation of beam quality, shadow quality, and color quality by lighting professionals. The report concluded that all 38 models of PAR38 lamps tested surpass halogen lamps in terms of energy efficiency. http://ledsmagazine.com/news/10/11/16
6.      ENERGY STAR® Center Beam Intensity Tool Update – The U.S. EPA has released an update to the Center Beam Intensity Tool for the ENERGY STAR Lamps specification to better reflect the Tool’s capabilities and limitations. The Tool was built using published data for common incandescent and halogen PAR and MR lamps in the market. The Tool’s underlying calculations remain unchanged, but now it will be clear when values entered are not supported by the underlying dataset. These updates were made to ensure that values generated by the tool reflect the intention of the tool and the incumbent technology dataset it was built from. Download at Light Bulbs for Partners
7.      Philips and Desso Announce Partnership to Develop Light Transmissive Carpets – Lighting maker Philips and carpet maker Desso said the partnership will further unlock the potential of LED integration into surfaces and will transform the way people interact with information and their environment in offices, hotels, conference centers and other public buildings. The LED light emitting carpets will provide many benefits in the areas of information, direction, inspiration and safety, such as guiding people around buildings, including safety exits and routes; enhancing the ambiance and atmosphere of the interior of buildings combining lighting with design and color; and helping to de-clutter spaces by making information visible only when needed. http://www.digitimes.com/news/a20131119PR204.html
8.      LED vs. Everything Else: Interior & Exterior – Instructed by Stan Walerczyk, L.C., C.L.E.P.  Yes, LEDs are new, rapidly improving and have the ‘wow’ factor, but how do they currently compare with high performance incumbent technologies and some other new technologies in interior and exterior applications? How will these comparisons change in just one or two years? What are the best applications for currently available LED products? When should interim technologies be used before LEDs are really ready for prime time in some applications? 8-Hour Distance Learning Seminar; Earns 0.8 CEU / 8 PDH; Presented in four 2-hour live online sessions; New Program Starts January 13 AEE Seminars registrar@aeecenter.org
9.      History of the Light Bulb – http://energy.gov/articles/history-light-bulb  Incandescents and existing lighting fixtures use designs that date back to Edison’s days. Replacing the old bulbs with LEDs is only the tip of the iceberg when it comes to saving energy on lighting. LED lighting systems designed to take full advantage of LED’s strengths have even greater energy-savings potential than forcing LEDs into 19th century fixtures. It’s hard to tell where lighting technology will go in the future, but one thing is clear: it won’t be your grandfather’s light bulb. To learn how the Energy Department is working to accelerate the efficiency and quality of LEDs, visit the Solid-State Lighting Program’s website

10.  Price of Electricity Hit Record for October; Up 42% in Decade – The price of electricity hit a record for the month of October, according to data released Wednesday by the Bureau of Labor Statistics. That made October the eleventh straight month when the average price of electricity hit or matched the record level for that month. The average price of electricity in October was 13.2 cents per kilowatt hour (KWH), up from 12.8 cents per KWH in October 2012—and up from 9.3 cents per KWH in October 2003. Americans now pay 42 percent more for electricity than they did a decade ago. – See more at http://data.bls.gov/cgi-bin/surveymost?ap
11.  2013 SSL Market Introduction Workshop Presentations Posted – More than 200 attendees gathered to share the latest updates and strategies for successful market introduction of high-quality, energy-efficient SSL solutions at the eighth annual DOE Solid-State Lighting Market Introduction Workshop, held November 12–14 in Portland, OR.  The workshop presentations and materials have been posted on the DOE SSL website at www.ssl.energy.gov/portland2013_materials.html
12.  http://www.globalconevent.com/

The MaxLite Innovative Troffer Retrofit kit offers an economical solution to upgrade existing fixtures to LED technology and can be retrofitted into the most existing troffers in less than 15 minutes. Optional trim lends a clean aesthetic to the installed fixture. Product features include: Quick installation in existing luminaires without the need to break the ceiling plenum.